Y2K. A computer bug caused the world to fear the internet would crash on January 1, 2000. And all of Mills James’ millions of dollars’ worth of computer tech would go with it.

Then the ball dropped in Times Square. And… nothing happened.

We wish we could say the same about the rest of the decade.

Ken and Cam were mulling substantial growth and expansion at the time – building a conference center and expanding the studio space.

Until they saw the numbers and decided to hold off. “We were getting a bit full of ourselves,” Ken admitted.

Their gut-checks served them well. What followed surprised the entire country: The 2001 economic crash. Banks froze, interest rates became erratic, foreign investors pulled back, and many businesses were forced to close their doors.

Ken and Cameron had deftly dodged the bullet of financial overcommitment. But the Mills James client parking lot still thinned out, and the existing business went into decline. It forced them to begin the incredibly difficult task of “controlling overhead” — which, let’s face it — is just a euphemism for letting people go.

The lessons of these tectonic shifts were bittersweet. The company needed to be more scalable in both directions and better insulated from macroeconomic realities in general, but damn did they hate firing people. The entire company hated it.

In 2003, business picked back up again. Then boomed.

One of the company’s legendary stories brings to life a key guiding philosophy: treat all clients and opportunities the same because you never know where things may lead.

A client called needing a simple rental: drape for their booth at the Ohio State Fair. Now Mills James Managing Partner and Chief Operating Officer, Scott Lanum, answered the call with no idea who the rental was for. He also didn’t have any drape.

But he made it work anyway. When he showed up on-site, he realized the client was the Ohio Lottery Commission, who then requested staging and lighting rentals too. Again, Scott made it work.

That one rental in 2003 has turned into a 17-year production contract – 52 episodes a year – for the Ohio Lottery’s Cash Explosion show.

Slowly but surely, the company gained a level of scale that was placing them on a national stage.

In 2006, Procter & Gamble decided to release a nationwide RFP to outsource their on-site event and video production to a third party. This novel strategic decision helped P&G focus on its core competency of building brands, relying on others’ core competencies in their own domains. It was a strategy that was years ahead of its time.

Nowhere near the biggest player, Mills James threw their hat into the ring, commencing a year-long process in which P&G dissected each company for their production expertise, breadth, cultural compatibility, financial strength, and scale.

For the first year, wanting to impress, Mills James tended to over-deliver on jobs, whether it be the caliber of equipment or number of people. P&G encouraged the company to better calibrate client needs across a consumer package goods empire that produced a firehose of meetings and content. Not every client wants the same thing; they advised us politely.

The P&G journey has been an excellent lesson for Mills James to learn to be better listeners. We’ve been in contract with P&G for 14 years now.

In 2006, Mills James had been around for 20 years. Ken and Cameron were in their 60s and were longing for an extended vacation — aka retirement. They felt it was time for a new generation of leaders to run the business, so they went to their accounting firm seeking advice. Over the next couple of years, Ken and Cameron decided on an exit strategy.

Rumors began circulating. They’d sold the business to new owners, and many believed it was P&G.

At the company holiday party in December 2006, Ken and Cameron made their announcement, confirming the rumor that they had sold the company. The new owners were actually at the party.

As employees began looking to the door for a grand reveal, Ken asked the room to stand up.

“You are the new owners. We’ve decided to sell Mills James to you, our employees.”

The room was shocked, excited, and confused. “How much do we need to invest to become owners?!”

Cameron explained that Mills James was now under an Employee Stock Ownership Plan (ESOP), assuring them, “The effort you’ve already put into the company qualifies you as an owner; the work you do is your investment.”

Mills James has always genuinely cared about investing in people because they are the product. People don’t get into the production business unless they are passionate about it. Becoming employee-owned merely amplified the sense of ownership people already brought to their work.

A couple of years later, the company faced its first tough hurdle as an ESOP: the Great Recession.

At first, the leaders decided to slow payments for freelance labor but immediately started receiving phone calls. Mills James had always paid promptly, sending checks out in under 30 days, so people noticed the delay right away. Still remembering their early days as freelancers, Ken and Cameron advised that delaying payments wasn’t the best place to make changes. “Cashflow is the lifeblood to freelancers,” Cameron explained.

Thankfully, Mills James was not just an event company. With experience in live video production, they helped clients pivot to virtual communication instead. Clients cut down on travel costs, and Mills James introduced new streaming capabilities in 2008. (No one knew at the time how important those services would become in 2020.)

Cashflow still existed, but more changes had to be made.

This is where the company faced its first “we’re in this together” moment as an ESOP. Ken and Cameron decided to take a 10% pay cut and asked department heads to do the same to avoid laying off employees. To their surprise, other employees began volunteering to take pay cuts themselves. They would rather see reductions in salaries than more people losing their jobs. 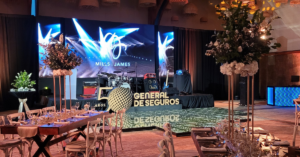